Prior to the 1950s, White Blood Cell counts were usually performed manually using the hemocytometer and the 100 cell microscopic differential count was performed using several variants of the Romanowsky stains, (i.e., Wright Giemsa, May Grunwald).

A key milestone was the award of a patent to Wallace Coulter for using an electronic method for counting particles. Shortly thereafter, he introduced the first viable electronic cell counter, the model A.

With the introduction of the transistor, this led to later models of cell counters, model FN and model S. The model S was the first automated analyzer providing a 7 parameter CBC result. Replacing manual dilutions and counts reduced the turn-around time to one minute from about 15 minutes.

In the early 1970s, Technicon Instruments introduced the Hemalog D, a 5-part differential analyzer based on cytochemistry staining of the WBC subpopulations while analyzing them with a continuous flow, optical measurement system.

As the need to reduce the number of manual differentials continued to drive the development of the automated differential, improvements were being made to develop computer based automated digital morphology analyzers. These systems used primitive software to characterize WBC images from a Wright stained smear and provide an estimate of each cell classification, providing images for the technologist to confirm by computer screen review. The Geometric

Data Hematrak model 590 was one such early system. In the 1980s, a 6-part differential was fully incorporated in a benchtop CBC analyzer from Technicon, which also incorporated a laser for light scatter detection.

The Abbott CELL-DYN 4000 was introduced in 1996, with capability for automated enumeration of NRBCs, automated reticulocyte counts, and later introduced automated monoclonal antibody assays for CD61 immuno-platelet count as well as Lymphocyte subsets.

Over the past 20 years, there has been continuous iterations of technological improvements and new methods providing an even more reliable means of reporting an automated differential.

Consideration criteria when selecting a hematology analyzer for your laboratory: 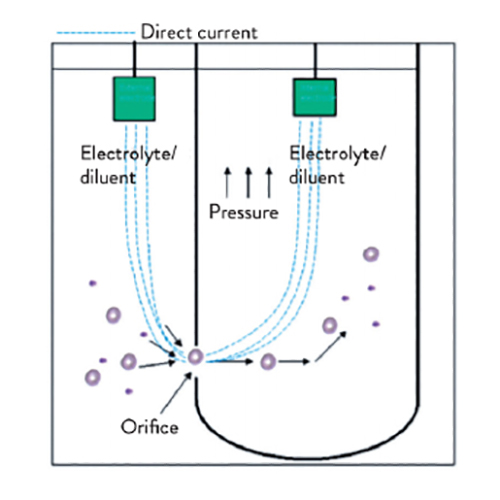 The traditional method for counting cells is electrical impedance, also known as the Coulter Principle. Whole blood is passed between two electrodes through an aperture so narrow that only one cell can pass through at a time. The impedance changes as a cell passes through. The change in impedance is proportional to cell volume, resulting in a cell count and measure of volume.
Learn More 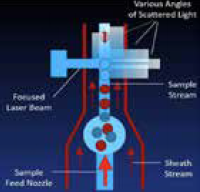 Unless otherwise specified, all product and service names appearing in this Internet site are trademarks owned by or licensed to Abbott, its subsidiaries or affiliates. No use of any Abbott trademark, trade name, or trade dress in this site may be made without the prior written authorization of Abbott, except to identify the product or services of the company.

The Alinity, ACCELERATOR and CELL-DYN systems are intended for performing in vitro diagnostic assays on samples of human origin (blood, urine). Read the instructions in the system manuals and labeling and/or reagent instructions carefully. Manufacturer or Authorized Representative: Abbott Germany.

Alinity h-series is available in select countries, not including the US.